Our Contender of the Month for July 2019 is:

This August will be Daylan’s One Year Contend-a-versary. In that time, he’s lost 25lbs, skyrocketed his cardio, buffed up like a Hollywood star, and looks fly sparring in the ring. It sounds ludicrous, but it’s true. What does he think of Contenders? “Not great. Jk, I love it here.” His exact words. What a guy.

Like many Contenders, he is a disciple of the 6am class. “C’mon, all the 6 am’rs know which class is the best. LONG COMBO FRIDAYS!!!!! If you haven’t tried it, come and see why it’s my favourite.” All-caps and five exclamation marks? Yeah. That’s Daylan.

Despite saying he doesn’t have a specific goal, he is incredibly motivated. His consistency and hard work in class have created very visible results, both in physique and skills. Fellow boxers have commented on how much he’s improved as a boxer in class, throwing sharp punches and moving gracefully. His sparring has improved a lot, and he can hold his own in the ring even with more advanced boxers. Sparring is something he wants to work on. His exact words? “I certainly have a lot of areas I need to improve on, but without sparring at least once a week, it’s easy to get away with. Bad Daylan.”

Although talking in the third-person is not recommended, Daylan does it anyway. It’s this same vigour and confidence that’s allowed Daylan to make so much progress in 11 months at Contenders. His advice for anyone thinking about joining? “Don’t think, just do.”

Daylan was brought into our gym by his friend Devin Laurent, but as Daylan says, “let’s not give him too much credit.” In his non-boxing world, Daylan is a real estate agent for the Lee + Pete Real Estate Group and Oakwyn Realty. He also likes to lift weights as well as golf. “I’m an awful golfer thought, I recently shot 144 which, if you’re familiar with golf, you would understand that could be the worst score ever shot by anyone who’s ever played golf. Ever.”

Well, that may be true, but you’re a doing a great job at Contenders! We’re happy to have such a friendly, kind, dedicated boxer in our midst – keep up the great work Daylan! 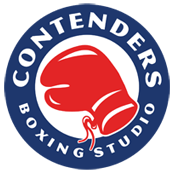